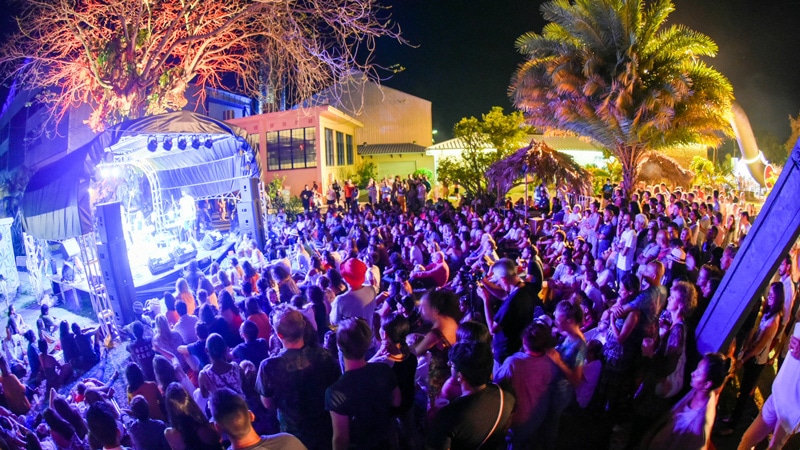 For the past several years, Kaz’Out has been a fixture among festival-goers in the North. For its 5th edition in 2018, the event brought together musicians, DJs and artisans, drawing the crowds in to L’Aventure du Sucre over the course of a weekend. The festival’s directors make every effort to include the Pamplemousses community in the planning stages of this event, which is increasingly eagerly anticipated every year.

Kaz’Out is a mix of ‘out of your house’ and ‘out of the box’. On stage, prominent artists perform alongside lesser-known musicians, some of whom may surprise you. The programming of the festival’s 2018 edition included artists from Mauritius as well as from Reunion, the Comoros and France.

For Laura Hébert and Lionel Permal, the event’s organisers, community engagement is the key to the festival’s success. Throughout the month of October, in the run-up to the event, their company, Lively Up, ran decorating workshops at their premises in The Mount. These were open to anyone who was interested in joining them. Participants were invited to bring along musical instruments and board games, better to enjoy the downtime between creative sessions. The aim was to raise attendees’ awareness of the various professions within event planning and the creative industries as a whole, thus opening up young people’s professional horizons.

At the Kaz’Out festival, there is a sense of warmth and unity that isn’t always present at large-scale musical events in Mauritius. During its November 2018 edition, young children and seniors alike were invited to discover new music, while a craft corner offered a range of fun activities to energetic little ones. On stage, the artists were buoyed by the crowd’s positive vibes and upbeat mood. All in all, L’Aventure du Sucre offered those in attendance a magical celebration of music.

At Terra, the promotion of culture and the arts is an issue of particularly importance to us. For this reason, we are now among the Kaz’Out festival’s official partners. We share Lively Up’s values, which are essential to the creation of projects of this size and ambition, and to bringing together Mauritians and foreigners of every origin. Thanks to their tenacity, their passion and their sense of innovation, we are confident that the Kaz’Out festival’s directors will continue to build on the event’s momentum.

Any cookies that may not be particularly necessary for the website to function and is used specifically to collect user personal data via analytics, ads, other embedded contents are termed as non-necessary cookies. It is mandatory to procure user consent prior to running these cookies on your website.